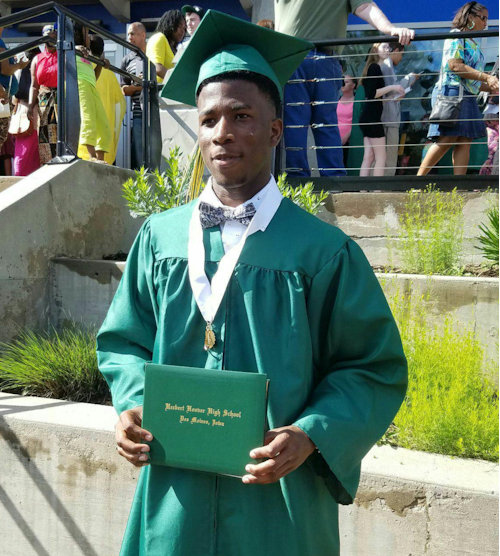 Tayo and his 5 children have been in The Home Connection since January 2014. Before they came into The Home Connection program, they had been living in a studio apartment. This spring Tayo’s oldest son Fiyin graduated from high school and started full time at Iowa State University Fall semester of 2016.

Fiyin came to the United States from Nigeria 3 years ago, where he was living with relatives, to be with his dad, he was 15 at the time.  He spent his first couple years of high school learning to speak English and studying hard, maybe a little too hard according to Fiyin.  He states it was difficult to make friends in the beginning due to his accent and learning the language, but he does state that teachers were patient with him and took the time to listen. It was during his junior and senior years of high school when he started to branch out more, signing up for soccer and making friends.

Over a year ago, Fiyin got his first job at McDonald’s where he worked part-time throughout the school year, his senior year. Between working, helping take care of his 4 younger siblings, and spending time participating with Freedom for Youth Ministries, Fiyin was able to graduate with a 4.0 GPA.

Due to Fiyin’s hard work and dedication to his studies, he was awarded several academic scholarships to provide the means for him to attend Iowa State University. He is now living in an ISU dormitory and living the life of a full time student. We are so proud of all of that Fiyin has accomplished in his short time in America and in The Home Connection program. We are very excited for this next chapter in his life.